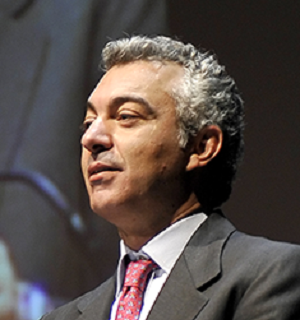 Domenico Arcuri, since 2007, is the Chief Executive Officer of Invitalia, Italy’s National Agency for Inward Investment and Enterprise Development.

He holds a degree in Economics from LUISS University (1986).

Domenico’s career began at the Institute for Industrial Reconstruction (IRI) where he was involved in the Corporate Planning and Control Department, particularly focusing on IRI’s subsidiary companies operating in telecommunications, IT, and broadcasting related areas.

In 1992 Domenico joined Pars, a management consulting joint-venture between Arthur Andersen and GEC, and specialized in high technology advisory services. Two years later he was appointed Chief Executive Officer of the company.

In 2001 Domenico joined Arthur Andersen - then acquired by Deloitte - as a partner responsible for Italy’s “Telco, Media and Technology” practice.
In 2002 he served as a partner at Deloitte and in 2004 he was appointed Chief Executive Officer of Deloitte Consulting and then Deloitte Outsourcing and Deloitte Risk Consulting as well as a member of the European Board of Deloitte’s network.

As Invitalia’s CEO and on behalf of the Italian Government, Domenico launched and implemented a significant corporate restructuring and reorganisation plan.
Today, Invitalia manages all national public incentives for business development and innovative startups, including Smart&Start Italy and Italy Venture Fund I.

In recent years, Invitalia has become an implementer for reindustrialisation of crisis areas, such as Termini Imerese and the Bagnoli area. In the latter case, having been appointed as advisor to the Ministry for Economic Development, Invitalia is involved in the reclamation of the area. Finally, Invitalia acts as a central purchasing body in public procurement, for example the restoration work of domus at Pompeii, which was performed in collaboration with the Ministry for Cultural Heritage and Tourism.

Domenico is a frequent guest lecturer at many academic conferences at internationally renowned Italian universities as well as a keynote speaker at workshops and seminars in economics and public policy related areas. Recently he delivered keynote speeches at “La Sapienza” University of Rome, “Federico II” University of Naples, “Aldo Moro” University of Bari, and Luiss “Guido Carli” University of Rome, to name a few. He regularly writes editorials, particularly for a dedicated economic column in the “Huffington Post”, on the economic developments of the Italian Southern Region.

On March 18, 2020, Domenico Arcuri was appointed by the Italian Government as the Special Commissioner for the COVID Emergency, with the mandate to coordinate the pandemic control measures.